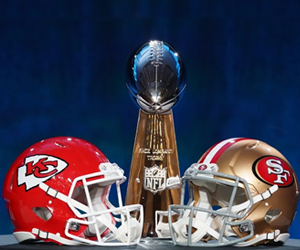 No matter your sports betting tastes, the Super Bowl has a bet for you. And fans of fantasy football can parlay their skills in evaluating players into a profit when jumping into the long list of player props available for the Big Game.

There a number of exciting talents on the field for the Kansas City Chiefs and San Francisco 49ers, which makes for great head-to-head player prop markets. If you’re looking to play the Online Sportsbooks props for the Super Bowl LIV odds, these are some of the best.

Patrick Mahomes vs. Jimmy Garoppolo: Most passing yards
If you’ve followed both quarterbacks through the postseason, you know there is a widening gap in terms of production. San Francisco has been run-heavy in its offensive playbooks and Garoppolo has attempted just 27 total passes in the postseason, connecting on 17 of those for a total of only 208 yards through two games – the majority of those gains coming in the Divisional Round in which the 49ers quarterback finished with 131 yards.

As for Patrick Mahomes, his arm has been front and center in the Chiefs’ run to the Super Bowl. Mahomes needed to pull Kansas City out of early holes against Houston in the Divisional Round and Tennessee in the AFC Championship Game, equalling 70 total pass attempts for 46 completions and a grand total of 615 yards, including 321 passing yards versus the Texans.

Oddsmakers have the handicap for this head-to-head passing prop at 69.5 yards, giving the lesser-used Garoppolo a head start. In the regular season, Garoppolo averaged about 249 yards through the air per game while Mahomes put up 288 – a difference of only 39 yards. However, Mahomes was slowed by injury in the second half of the season.

George Kittle vs. Travis Kelce: Most receiving yards
This head-to-head prop pits the two top tight ends in the NFL against each other on the biggest stage in football, with Kelce a 1.5-yard favorite to have the most yards receiving in Super Bowl LIV.

Kelce plays within the more active passing offense but doesn’t break off the big gains like Kittle has been known to do. In the postseason, the Chiefs’ tight end has been hit and miss. He had a huge day in the Divisional Round, with 134 yards and three touchdowns but only caught three balls on four targets for 30 yards in the AFC Championship.

Kittle, who finished the regular season with an average of 75 yards per game, has been mostly used in running block schemes during the playoffs. Kittle has been targeted six times for four receptions and 35 total yards. He had only one catch for 19 yards in the NFC title game. However, Kittle does have big-play ability and can break this prop wide open with a single catch.

Raheem Mostert vs. Damien Williams: Player to score TD first
Mostert had a monster day in the AFC Championship, finding the endzone four times in a win over Tennessee. The 49ers have spread the work around a deep roster of running backs and Mostert has had a nose for paydirt in recent games, with seven touchdowns in the final six games of the regular season. That’s why he’s a heavy -170 favorite to score a touchdown first versus Williams.

Williams is no slouch in the red zone either, despite sitting at +145 for this prop. He’s scored a total of four touchdowns in the playoffs and is a danger to run in six points or catch and run for a score. Williams has five rushing scores in the regular season along with two receiving strikes, including 30 catches for 213 yards.

The Chiefs defense was great at slowing down opposing running backs, ranked sixth in fantasy points allowed to the position, including 11 touchdowns on the ground and an additional five scores to pass-catching RBs. The San Francisco stop unit was the third best defense versus running backs, giving up eight rushing touchdowns and only one receiving TD to rival running backs.